We hope you enjoy seeing our fantastic learning in Year 5!

During Internet Safety Week, Year Five discussed what sites we access on the internet. We spoke about how to keep ourselves safe when using the internet and rules about sharing images online.

As part of our topic 'What Price Progress?' Year Five designed and created items that would make their lives easier.

As part of our science topic 'Seperating Materials', Dali class mixed different materials together to create reactions and new substances.

During Take One Picture Week Year 5 researched the artist Vincent Van Gogh and wrote biographies about his life. We studied, recreated and made our own interpretations of one of his most famous paintings, Starry Night using a range of techniques.

This year the theme for anti-bullying week was 'All Different, All Equal.'

In Dali class we took part in a variety of activities which showed how we are all different but we all expect to be treated equally.

We created bunting to be displayed in our classroom to remind us how we should treat others and how we expect to be treated ourselves.

Years 5&6 spent a week learning about The Tudors

As part of our 'Forces' science topic, Year 5 investigated the relationship between the size & weight of an object and the size of the crater that it creates.

Check out our E-safety T-shirts for Safer Internet Day! 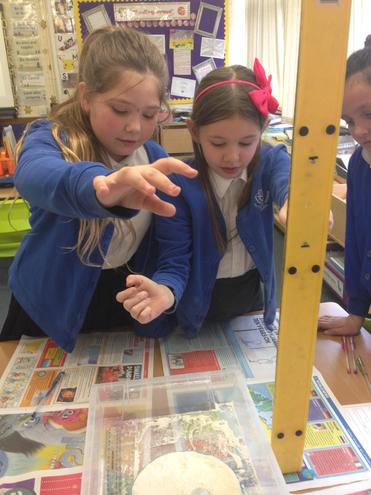 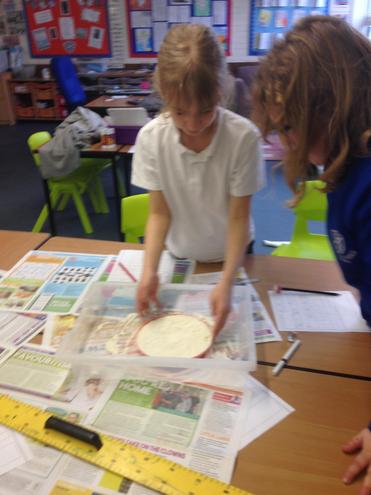 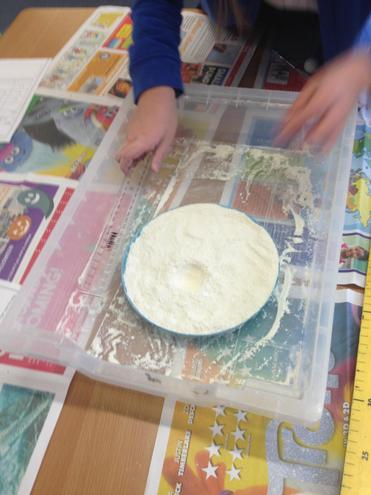 We have been learning to paint pictures to go with our spooky stories.

Our display of our stories and pictures:

We have been learning fractions in different ways. First, we used ipads to play some of the fraction games on Topmarks. We also played a board game to work out equivalent fractions. Lastly, we played a fractions loop card game.

We have been making alien landscapes using a photo editor

In Dali, we had to find out the perimeter of the classroom. It was no easy task!

First we had to plan our investigation. This included deciding what tools to try  (Metre stick, trundle wheel, tape measure, string), and what things to consider (scale, furniture getting in the way, working as a team).

We then found out that the string and tape measure was an effective way of measuring. We recorded the length of each wall in our books. 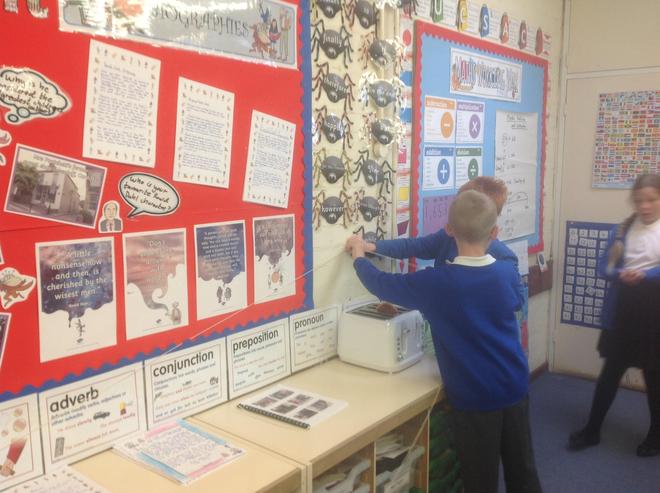 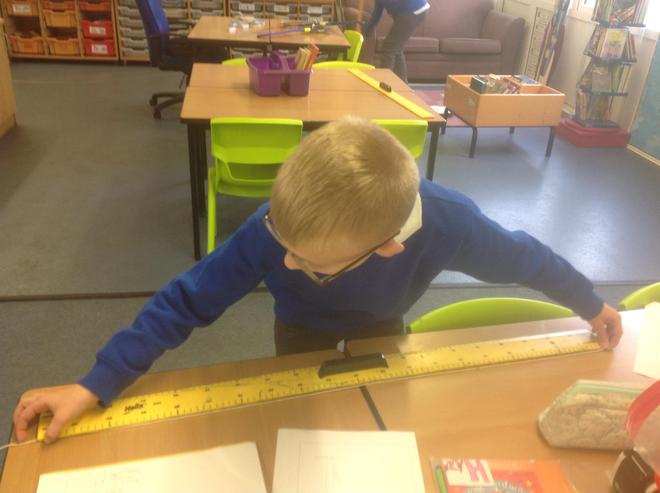 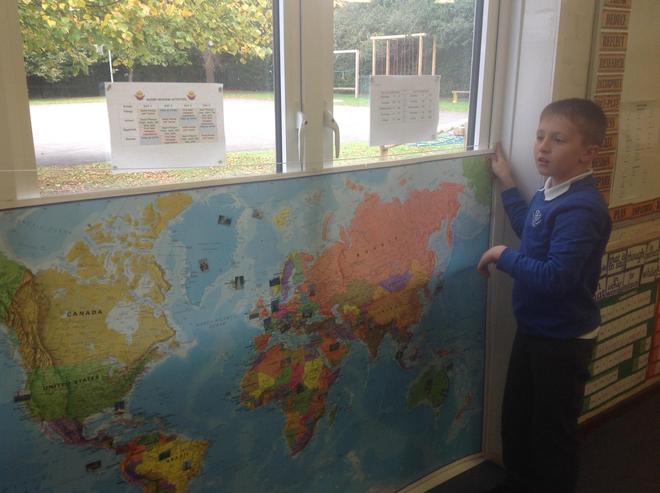 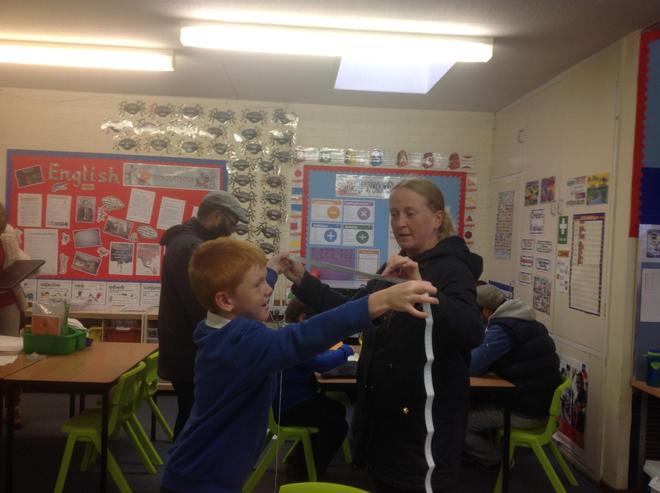 Once we had measured the classroom we had to add up the 12 sides and we all got a final perimeter of between 46-47 metres. Not bad! We then drew scale models using the correct measurements and scale. We had to double each measurement then divide by 100 to get a good scale from metres to centimetres. 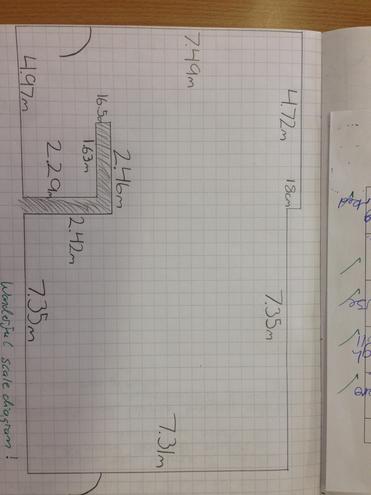 We then evaluated the tools and the project. 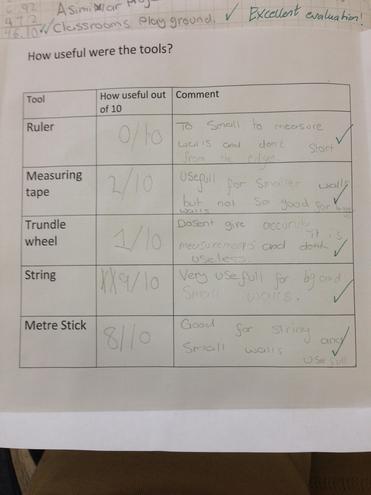 "The best thing was using Sketchup and measuring with the equipment. The hardest thing was getting the correct measurements." - Lucy

"The best thing about the investigation is when we got to make it in Sketchup. The hardest thing was doubling the numbers to draw it in our books. A similar project would be to measure the playground." - Kdee

.Our parents and carers were invited to see the finished models that we made in Google Sketchup! We added a bit of flair to the projects as we designed the classrooms with our own colour schemes and creativity.

We have been using oreo cookies to learn about the phases of the moon!

We have made timelines about the history of Space Travel!

This week we were making parachutes to see which ones would fly the best. We quickly realised that the ones with the larger surface area would take the least amount of time to fall back to earth. This is because they had more air resistance. Also, the smaller parachutes had less air resistance so fell quicker.

We have been learning to say, read and partition numbers to 1,000,000 using maths dominoes. All the groups were extremely successful and worked really well together! 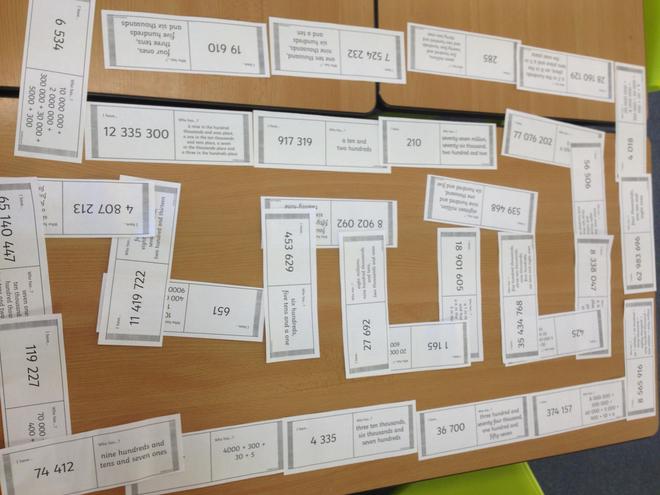 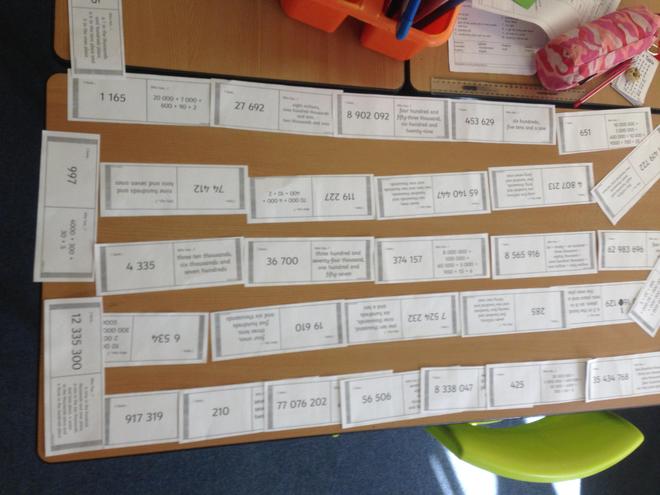 Year 5 have been studying the picture ‘The Temptation’ by Salvador Dali. It is an example of Surrealism, which is about making strange dream-like images mix in with what’s real. We noticed that the legs of the animals in the picture were metamorphosing, becoming spindly and spider-like.  We also noticed that some objects were out of place. This is called dislocation. To reproduce this, we learned how to sketch an animal in stages and blew it up to a bigger size. We then used water colour to paint it with techniques like ‘wet on dry’ and ‘wet on wet’. Lastly, we added material and beads to give the image a 3D effect.